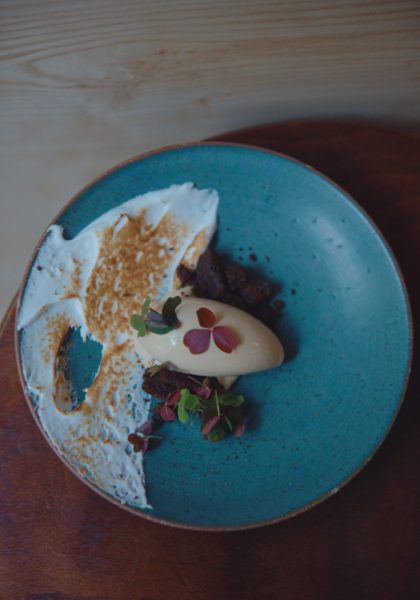 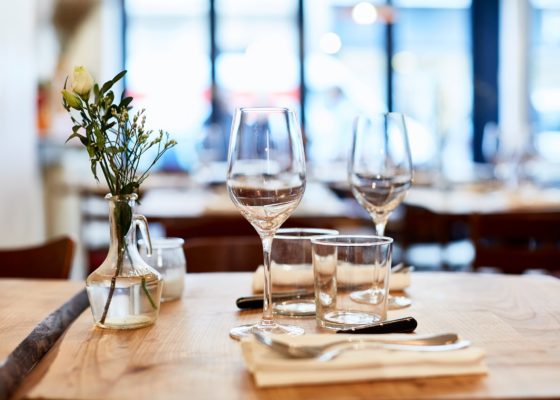 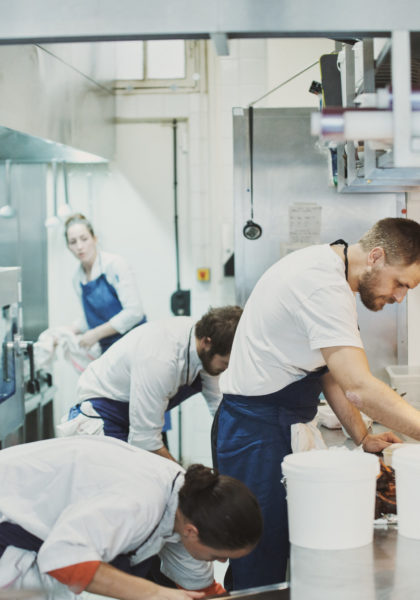 “Fulgurances, l’Adresse” acts as an incubator, welcoming young chefs to take over the kitchen in order to find and refine their identity, test their ideas, and learn how to manage a team, before setting off to open their own restaurant. The natural evolution of our event “Les seconds sont les premiers”, which brings sous chefs center stage, and a more long-term approach that gives these young talents a creative space where they can thrive. If you are currently a sous chef, on the brink of setting off to open your own restaurant, don’t hesitate to get in touch! Perhaps you could be the next resident chef at l’Adresse. 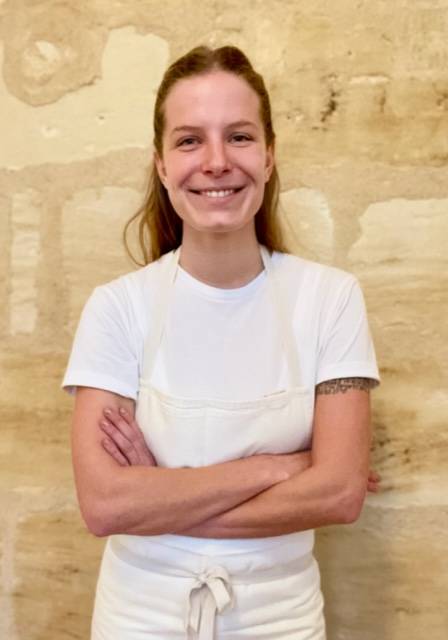 Alice Arnoux is from Arcachon. To stay close to the ocean, she left for Noirmoutier to work at La Marine alongside Alexandre Couillon.

After this rich founding experience, Alice moved to England, where she worked with Merlin Johnson, and then to Copenhagen, at Noma. These experiences confirmed her love for agriculture, fermentation, and for an instinctive and pure approach to cooking. She is particularly fond of fish, which reminds her of her roots, and has a deep love for the mountains, where she sees herself moving one day to open her own farm. Before that, Alice plans to open her restaurant in Bordeaux. 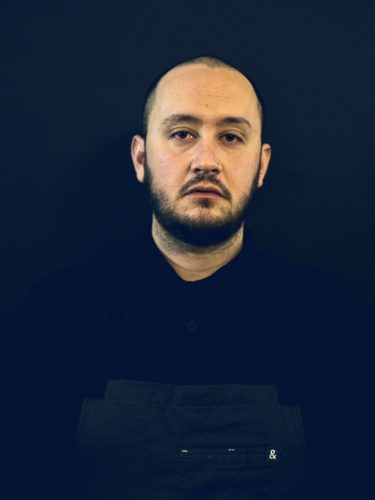 Fidel Caballero is joyful by nature. Even more so when he arrives in Paris for a spring residency, his favorite season.
This thirty-year-old chef from the north of Mexico, Juárez/El Paso, is not on his first trip. For the past 13 years, he has been traveling between China, notably in Shanghai, and Europe, in the Basque Country, where he worked with the great Martin Berasategui***. From these experiences he has kept, in addition to the exciting change in scenery and an openness to the world, precise techniques, sometimes ancestral, and a unique approach to each product which gives him new tools to express himself. When asked him about his style, he responds with a mischievous smile; a smile from someone always on the move. Fidel prefers to evoke regional dishes that he interprets in his own way, “black pudding with mole” for example, the pil pil sauce that he preciously kept from the Basque country, the spices and peppers that he brought with him in his suitcase, or to name the ingredients that are surprisingly to us the most used in his homeland: cheese and other dairy products, and wheat, to name just a few.
The young man who has been living in New York for five years and was the sous chef of the superb Contra bistro is looking forward to cooking for two months at Fulgurances l’Adresse, before opening his own restaurant Corima, an expression and ode to a cuisine that is both deeply rooted and profoundly forward-looking. A cuisine that he likes to call progressive Mexican cooking. 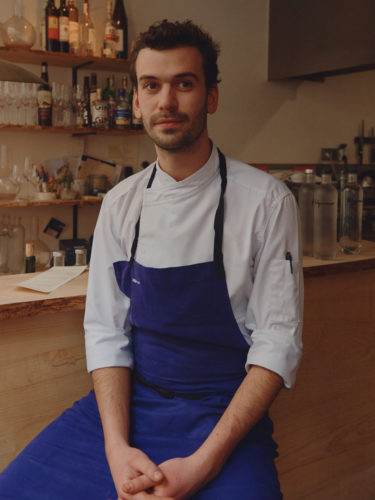 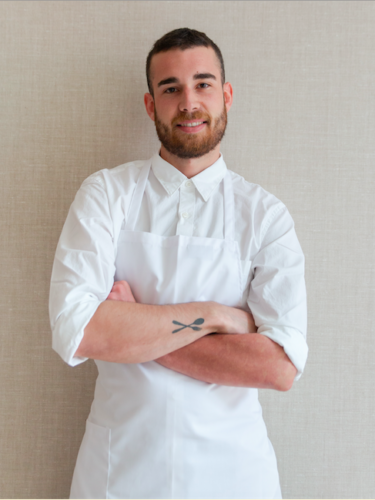 Iñaki grew up in a family where cooking, and everything surrounding it, was a central part of life. “We cultivated, fished, fermented; we cherished nature. I remember when I was young and could not even reach the kitchen counter, I already had my hands in the dough to make fritters with zucchini from the garden.”

He quickly realized that he would one day become chef. After culinary school in Bilbao, Spain, he worked in multiple traditional restaurants to learn the basics. He then decided to explore a more creative and gastronomic type of cooking at Andoni Aduriz’s  Mugaritz (Errenteria, Espagne), René Redzepi’s Noma (Copenhagen) and Nerua, where he stayed for four years and eventually became chef Josean Alija’s sous chef. “I learned a lot at Nerua, not only because Josean’s vision is incredible – pure, precise, elegant – but also because we travelled around the world and collaborated with a lof of very inspiring chefs.” 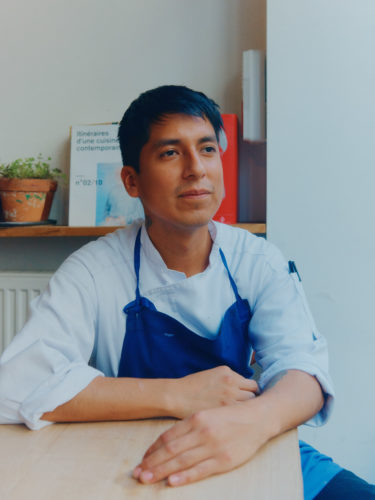 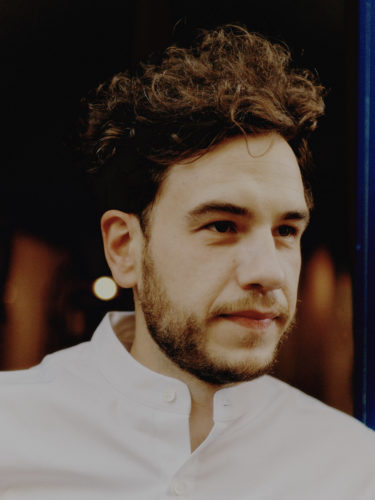 Very attached to his Auvergnat roots, Bruno Laporte trained in classic French cooking early on alongside Emmanuel Hodencq in his restaurant auberge anchored in local terroir. He stayed there for four years. In 2009, Bruno left to explore the vegetable-driven cuisine of Jean-Luc Rabanel in Arles.

His first encounter with William Ledeuil (Kitchen Gallery, Kitchen Gallery Bis and Kitchen Terre) was decisive since it lasted five years. He held multiple positions and opened Kitchen Terre. As the executive chef, Bruno was completely free. “He allowed me to cook from the heart, it was one of the best times of my life.” Hungry for new experiences, Bruno left to discover new horizons, travelling throughout Asia for four months; a voyage that he lived as a pilgrimage. “It was important to me to go to the source of all the flavors and ingredients that we cooked at Kitchen.” 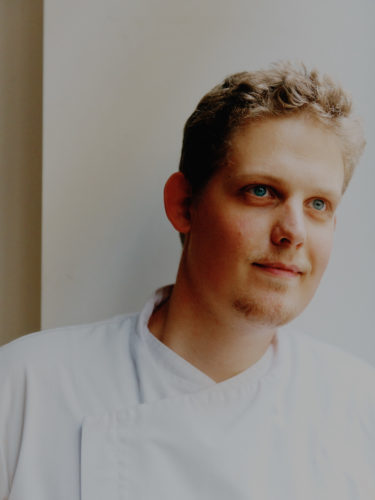 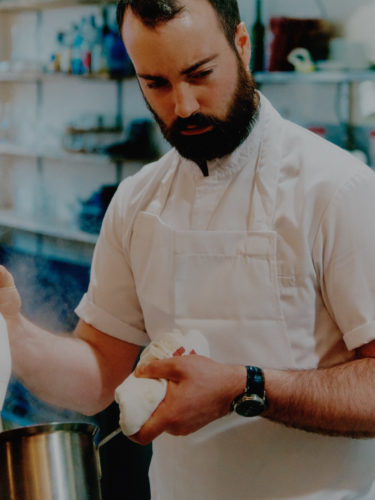 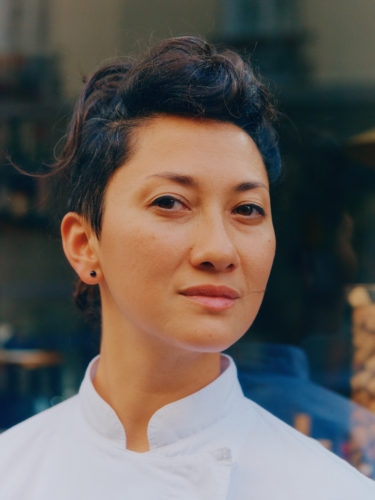 Akané’s cuisine is marked by her origins: her father is a butcher from Burgundy and her mother is Japanese; French terroir intermingled with Japanese delicacy.

The young woman grew up in the heart of Burgundy. After studying architecture & art, she travelled around the word. That is when she discovered her passion for food.

Akané admits that for quite some time she was a « nomadic cook, constantly searching for new inspirations and developing new skills. » She speaks fondly of the talented cooks with whom she has worked with in Tokyo, London, New York, Paris and recently Lima, at Central where she worked with Virgilio Martinez, and San Francisco alongside Dominique Crenn. 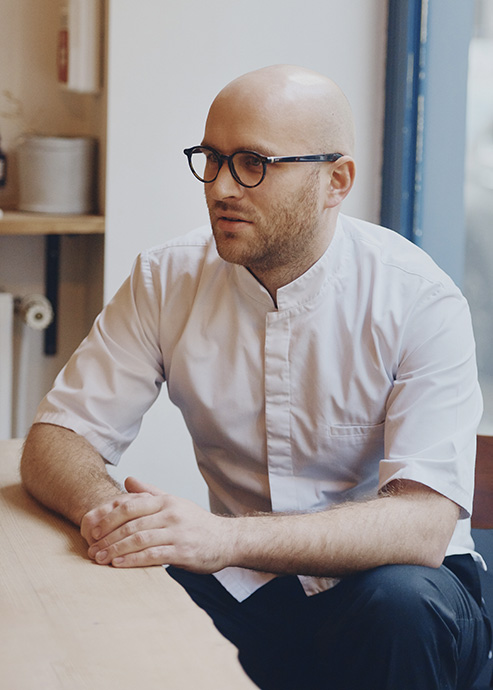 When we listened to Alban’s culinary career path, we immediately felt his passion for fire, omnipresent in each and every one of his experiences: his uncle, who was a cook, initiated him to the quality of ingredients and the taste of the barbecue, his chefs Alain Perrilat Mercerot and Laurent Petit introduced him to their committed cooking techniques, and his travels in Australia and Tasmania taught him how to cook over a wood fire. Beyond both cooks’ love for wine, they have a sense of freedom in their cooking that gives them wings and allows them to experiment, with fermentation for example: vinegars, lacto-fermentation, charcuteries, fish sauce, soy sauce and bread, which Alban baked every day in Switzerland.  Alban likes nothing more than a dish where the technique disappears, leaving room for a passionate cuisine, full of emotions. 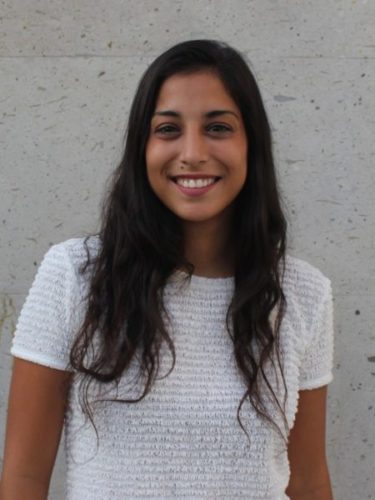 Mariana was born in Monterrey, Mexico, where she developed her taste for vibrant cultures and flavors. She moved to New York to study at the prestigious Culinary Institute of America and discovered her passion for local agriculture, seasonal ingredients and creating special relationships with farmers during her internship at Blackbird in Chicago. After graduating, she joined Danny Meyers’ team at the Union Square Café, then worked for chef Enrique Olvera at Pujol and at Cosme. As chef de cuisine, she worked with the team to combine high-end cuisine with traditional Mexican dishes and flavors. 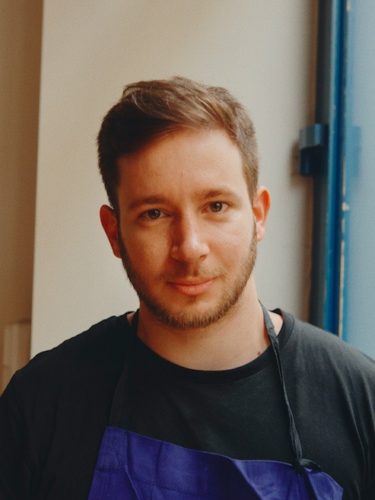 Raphaël Calisto didn’t always know that he would one day become a chef. He found his way through a program that combined art, economics and cooking. Kobe Desramaults rapidly noticed his talent and decided to integrate him in his new project De Superette in Ghent. At Fulgurances, the young chef combined his experience in Belgium, his Portuguese roots and his ties to Paris, the city where he was born but never actually lived in until today. 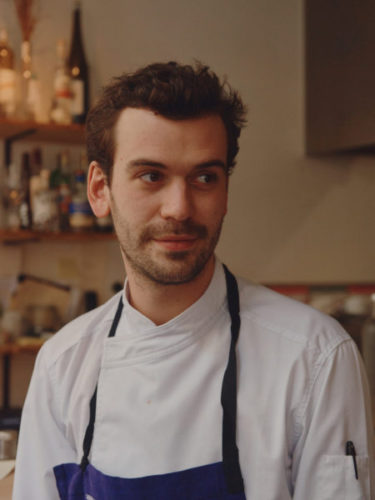 Antoine had just returned from a long journey around South-East Asia, where he was moved by the simplicity of dishes eaten on the street, or in a fisherman’s village. What is essential, what lasts, that is what is important. We were thrilled to welcome Antoine Villard at Fulgurances for a couple of days. 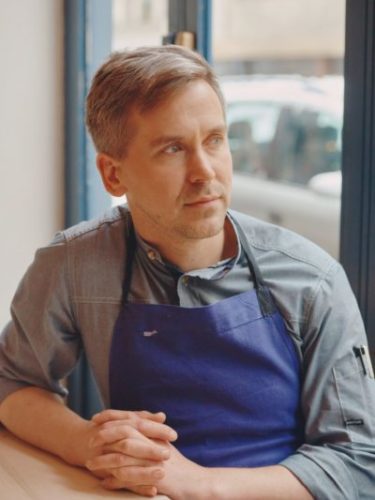 When Peeter Pihel speaks of his cuisine, he evokes “unpredictable simplicity”. This motto rings like a mantra for the young Estonian chef. We were truly moved by his cuisine a couple of years ago on the island of Muhu at the restaurant Padaste. At Fulgurances, Peeter created a new culinary repertoire and began a new dialogue with our regular guests. 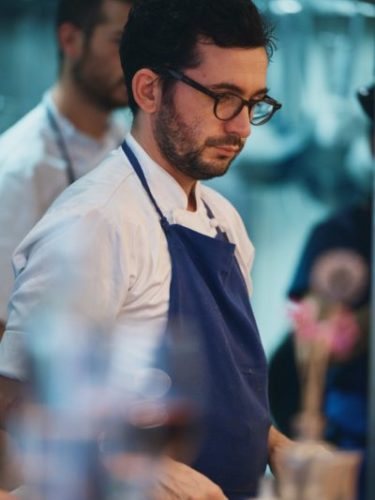 Sebastian is an enthusiast. He speaks quickly, smiles a lot, and loves to share stories and anecdotes about his travels. The young chef was born in Australia, but London is where his cooking career truly began. He was Portuguese chef Nuno Mendes’ sous chef at Viajente, and then became the chef of his new restaurant Chiltern Firehouse.

Celine Pham first delved into the world of music before realizing that she spent most of her spare time helping friends in their restaurants. She eventually took the leap and signed up for culinary school at Ferrandi in Paris. At Fulgurances, her dishes were filled with her memories of Vietnam, her travels, her stories, intertwined with a true ecological consciousness and a constant search for balance; and bursts of emotion. 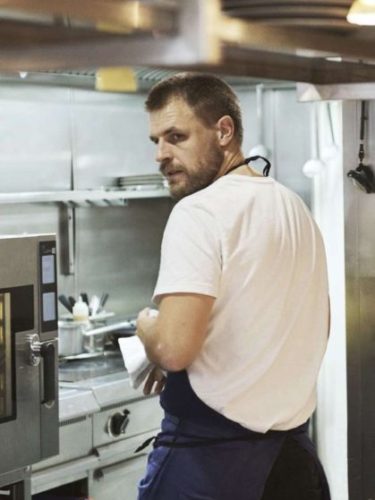 Sam Miller was our first ever guest chef. He is from Northern England, and was the youngest sous chef of Britain’s institution le Champignon Sauvage. He then travelled around Europe, in Spain at the Mugaritz and El Bulli, and in Scandinavia at Magnus Nilsson’s Faviken. A rich and startling journey that pushed him to go even further, all the way to the other side of the globe to Australia, to open Silvereye.In Paris, he combined his many past experiences and sharpened his cooking style. 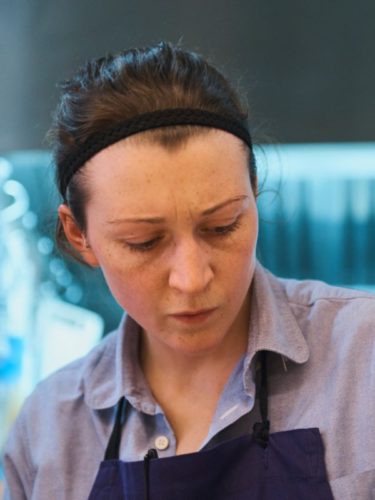 Rose will never forget where she comes from. The first thing she talks about when asked about herself is her childhood in the family farm in Ireland, where she learnt how to churn butter with her mother with the milk of the cows from the surrounding pastures, and where her father taught her how to tame the land. Rose was Kobe Desramaults’ sous chef at In de Wulf in Belgium for four years. That is also where she met Margaux, a French cook who became her accomplice, and with whom she plans to open her first restaurant. 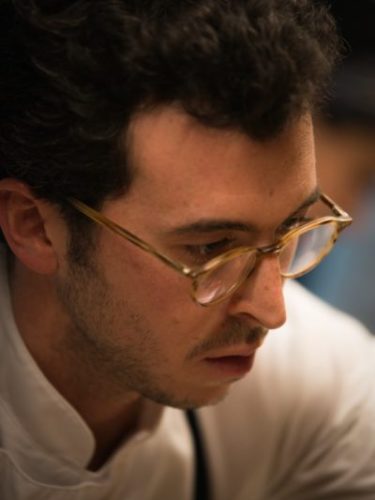 Before taking the reigns of Fulgurances, l’Adresse, Tamir Nahmias was Grégory Marchand’s sous chef for three years. He also worked alongside Adeline Grattard at Yam Tcha and Pascal Barbot at l’Astrance. Both different and powerful experiences for this young Israeli chef, who now wishes to give us a little piece of himself and uncover his own cuisine : Middle-eastern flavors with a creative and contemporary twist.

Our first resident chef was Chloé Charles, Bertrand Grébaut’s former sous chef for two years at Septime. She also worked alongside David Toutain at l’Agapé Substance. We discovered her a couple of years when we invited her to do one of our « Seconds sont les premiers » dinners.